In our webshop you will find WiFi USB adapters from various manufacturers such as ALFA Networks or ASUS. The use of a WiFi USB adapter is a quick and easy solution to integrate a non-WiFi-capable PC or notebook into a WiFi network. In addition, WiFi USB adapters with external visible antennas usually have a much higher range than, for example, the internal WiFi module of a notebook. The difference between the WiFi USB adapters offered is essentially in the transmission power, the chipsets used and the supported standards (IEEE 802.11a/b/g/n/ac). 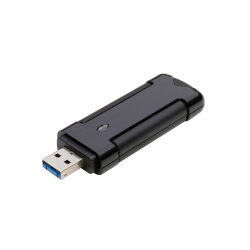 A WiFi USB adapter can be used to integrate devices such as older PCs, game consoles or Smart TVs into an existing WiFi network without having to work with a ethernet cable. It is only important that the terminals have an appropriate interface, in this case a USB port. WiFi USB adapters are external WiFi adapters, in contrast to the standard internally installed PCI cards, as they are now standardly installed in notebooks. WiFi USB adapters are a particularly popular solution, especially because of their small size and ease of use, if non-WiFi-capable devices are to be connected to a WiFi network.

WiFi USB adapters are the most common variant of USB adapters. They are available in two different versions, either as sticks that look similar to an ordinary USB stick or that can have an external antenna. In addition, there are also WiFi USB adapters that have a housing, can be set up independently and connected to the terminal via a USB cable. These adapters are usually more powerful and can also be optimally positioned when needed, which is useful for the range. They look almost like small routers and can either be powered by the USB port or an external power supply.

Since there are some significant price differences in the WiFi USB adapters, the quality is also different. Depending on the requirements of the device, you should decide how much you want to invest in the purchase. One difference is that not all WiFi USB adapters support all WiFi standards. The common standard today is IEEE 802.11, depending on the version different transfer rates are possible. With 802.11 a,b and g transfer rates of 54 Mbps are achieved, which is very little, which is why there are hardly any Wi-Fi USB sticks that support only this standard. The most common is 802.11n with transfer rates between 150 and 600 Mbps. WiFi USB sticks, which also support the best standard 802.11 ac capable of transmitting data at up to 1300 Mbit / s, are relatively expensive. Basically, the adapters are compatible with the lower standard, but not vice versa. Which standard is used in the WiFi network, specifies the wireless router. This can usually also adapt flexibly, but you should avoid that only due to a weak Wi-Fi USB stick, the entire Wi-Fi network is weaker. So if you already have a router that supports 802.11 ac, should also resort to accessories such as the wireless adapter on a corresponding device, even if it is more expensive.

Even when using a WiFi USB adapter, you should pay attention to a sufficient security in the network to avoid harmful attacks by outside third parties and infiltration of the connected terminal. This is currently the latest encryption protocol WPA2 used, which is supported by most modern devices. In addition, a secure password should be selected and set up to secure the network. The router should also be set so that devices that want to dial into the new network, must always be registered by hand, which makes it difficult for hackers to penetrate into a WiFi network.

The range of a WiFi USB adapter is, just like with a router, largely dependent on the external factors and the WiFi standard used. If there are clear obstacles in the apartment or in the house, these should either be removed or it must be helped by a wireless repeater. Alternatively, a WiFi USB adapter with external antenna or housing can help. The latter can be better positioned, for example, which can already result in a significant increase in reach.

If, despite the WiFi USB stick no or no secure connection to the wireless network can be made, this may be due to a lack of range or a low WiFi standard, but it may also be that the stick has been damaged. Especially external antennas can be very vulnerable, even if no external damage is detected. In most cases, it pays to invest in the equipment of well-known manufacturers, as these have better processing and quality assurance and are therefore often more durable. Basically, a WiFi USB stick should always have been thoroughly tested ex works and survive, for example, minor falls without damage. In addition to the robustness of high-quality WiFi USB sticks are usually better equipped and support, for example, higher wireless standards, which can be achieved in combination with a corresponding wireless router significantly higher transmission rates and in the end faster and carefree on the Internet can be on the road.

For which WiFi USB adapter one ultimately decides is therefore really dependent on the own requirement and the question what to expect from the device. Anyone who is unsure, can also fall back on a consultation, usually turns out quite quickly, which device is best suited!