Some WiFi routers, especially the FritzBox or Speeport routers mostly have a fixed, non detachable WiFi antenna. It is not possible to change the antenna.

Especially for this situation, we offer some modification sets. Either to have an external antenna connector where you can install various kinds of antennas or amplifiers or a stronger wifi antenna.
Item name from A to Z Item name from Z to A Price in ascending order Price in descending order Weight SKU Release date Newest first GTIN Bestsellers Reviews
10 20 30 40 50
Items 1 - 6 of 6
Sale 33% 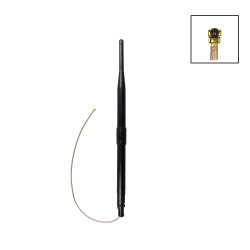 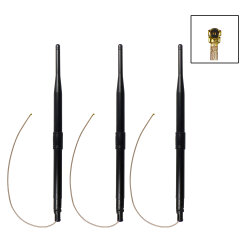 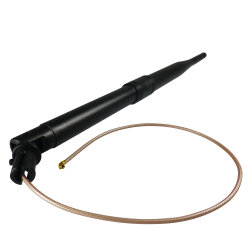 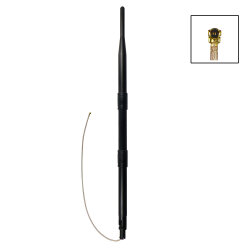 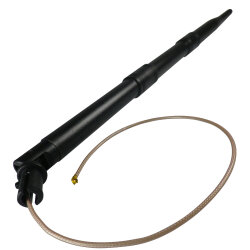 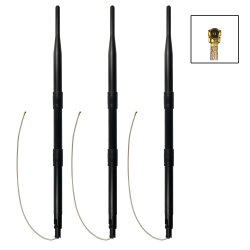 The FritzBox from AVM is a widely used router. It is used not only to connect to the Internet, but also as a WiFI Accesspoint, a basis for DECT or wired telephones, as firewall, print server or even as a central base station for the management of electronic devices in your home network (smart home). However, these functions can only be used properly if a stable Internet / WiFi connection is guaranteed. Since the FritzBox comes standard with comparatively low-power 2dBi WiFi antennas, this is not always the case. However, the WiFi antennas are not readily interchangeable, but must be removed manually to replace them with more powerful models and to take full advantage of the benefits FritzBox.

What does a WLAN router have to do?
A wireless router is the interface to the Internet for the mobile devices within a home network. It is connected to the telephone jack via a network cable and then transmits the signal via the WiFi antennas to the mobile devices. Depending on the number of network connections, non-WiFi-capable devices such as printers can also be connected, for which routers such as the FritzBox then serve as print server. Ideally, the router should be placed in such a way that its signal does not have to pass obstacles (walls, ceilings, furniture) or other disruptive factors such as metal on the way to the devices. Naturally, this is hardly possible in an apartment or even a multi-storey house. This suffers on the one hand the range of the WiFi signal and on the other hand its stability. Depending on the extent of the disturbing factors, the range is then quickly limited to a few meters. The result: the WiFi signal breaks down frequently or is very weak, larger amounts of data can no longer be transmitted safely.

What to do if the range of the router is too low?
If it is not possible to place the router in a more suitable location (this is often not possible for practical reasons, because the telephone jack is fixed at a certain point), this can be remedied, for example, by more powerful antennas. Since these turn out at the factory FritzBox rather low performance, worth the investment. Through the FritzBox modification kit you can remove the existing antennas and get a connection option for more powerful wireless antennas, which solve the range problem quickly. It is important, however, to make sure that some models use not only one but several WiFi antennas. Depending on the function, several or all existing WiFi antennas must be unscrewed and replaced in order to really achieve a performance gain. If you have questions about the model or assembly, you are welcome to contact our dedicated customer service!

Still having problems with the range?
In addition to the ability to equip the router with new and more powerful antennas, there are other ways to increase the wireless range and to ensure a secure and stable Internet connection even in higher floors or remote areas. First of all, it should be checked if you can optimize the position of the WiFi router. Not infrequently a higher position, for example on a chest of drawers or the cupboard, already improves the signal strength. In addition, some obstacles can be removed, such as metal plates lying around, thick carpets on the walls or furniture directly in the vicinity of the router, which slow down the signal. If this is not possible, there is also a technical remedy. Especially in multi-storey houses, the use of WiFi repeaters has proven itself. These pick up the signal and give it in the same strength weter. Ideally, the WiFi repeater should be placed halfway between the router and the devices, but in any case where it can still receive a good Wi-Fi signal. It should be noted, however, that although the signal is played back in the same amount, the transferable amount of data is halved because the WiFi repeater can not transmit and receive at the same time. Who does not want to do without it can work also with a WiFi amplifier. This amplifies both the outgoing and the received signal and allows overcoming large distances. However, care must be taken that the statutory maximum transmission power of 100mW is not exceeded. So if you already use powerful Wi-Fi antennas, you can not achieve any improvement here. Other ways to increase the range are a so-called powerline network, in which the signal is distributed through the mains in the house. Even the wired version of a LAN network offers some advantages such as signal stability, fast transfer rates and high data rates

Items 1 - 6 of 6
Kategorien You are here: FritzBox Modification
Kategorien
Available immediately 6
Special offer 6
Oh no! Harry, get the glass ball!